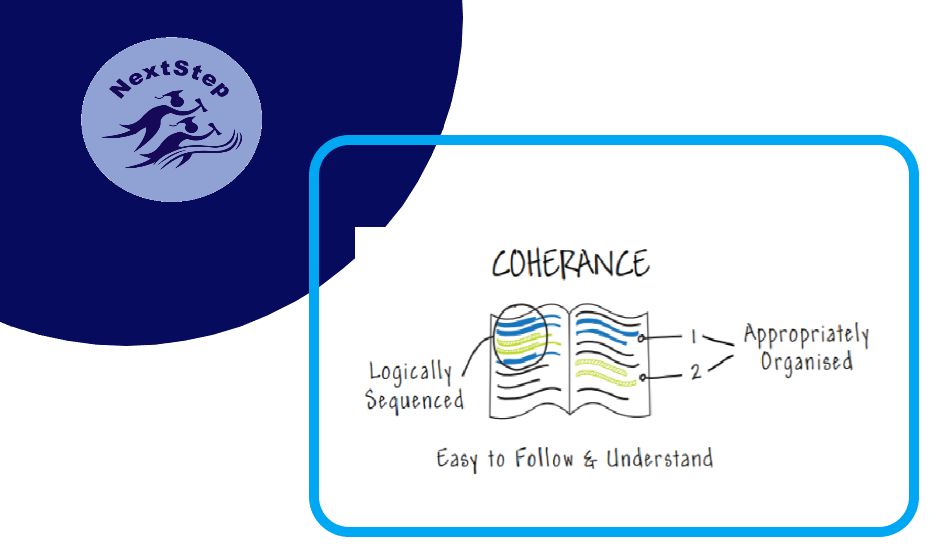 By Next Step Learning, Best IELTS Coaching in Dhaka

Coherence and Cohesion in IELTS Writing

Another important thing to remember about coherence and cohesion is that, a sentence can cohesive but incoherent at the same time.

He is a player. The player was late for practice. Practice makes a good tree. The tree is on the other side of the field. The player is on the tree.

Each sentence of the text above is notionally connected to the one that precedes it, in terms of both grammatical and lexical means, but the entire text is ultimately meaningless. So, the whole text is cohesive but not coherent.

However, in some scenarios a conversation or text may appear incoherent although it becomes coherent to us, due to the ease of understanding of the context.

We can look at the following conversation as an example,

Person 1: There are the keys.

In a nut shell, cohesion is the way of conventionally accentuating the text, while coherence refers to reader’s or listener’s extent of understanding the text. Thus, Cohesion is objectively ratifiable, when coherence is more subjective. So to say, a text can be coherent to someone, when it is incoherent to others.

The affinity between Coherence and cohesion is debatable. While a text with unrelated statement can be navigable but articulating it with some cohesive devices such as, and, but, so can make it much facile for the readers and listeners to extrapolate communicative intentions. However, a complete disarray of words can’t be made more coherent just by salting it up with some cohesive devices.

The best way of achieving textual cohesion is to concentrate on the way the sentences are connected in a text. The best way to practice cohesion will be trying to connect split sentences from various sources. Consequently, identifying lexical chains in various text is also a good way to alert thyself about the role of lexis in binding a text together.

Coherence is a bit more evasive but it is well connected to the way the content of the text is organized. If the content of the text delivers the context meaningfully, then it is likely to achieve the communicative effect. So, to enrich the idea about coherence one can anatomize the generic features of certain text types. One more, important thing to keep in mind while writing a text coherently is to have a clear idea about the purpose of the text.

Decide which cookies you want to allow. You can change these settings at any time. However, this can result in some functions no longer being available. For information on deleting the cookies, please consult your browser’s help function. Learn more about the cookies we use.

With the slider, you can enable or disable different types of cookies: